Public domain illustrations are one of the greatest tools in an indie publisher/writer’s arsenal, but if you don’t know where to find them or how to make production-ready files from them, then they’re not going to do you much good.

After being asked to make some of the illustrations used in Masque of the Red Death (and others) available to potential Gothic horror adventure writers, I released the Gothic Earth Art Pack for DMs Guild Creators. It’s a collection of 134 images curated from various public domain image publications and image libraries, cleaned up and ready to be used in production files (and, in a few cases, retouched a little to change the content).

But these images aren’t going to be enough for every book. So this post provides a basic run-down of the process I went through to find, convert, clean up, and prepare files to use in Masque of the Red Death, so that you can use it to find other illustrations and have them look as good as possible.

This is not a one-click process, but anyone with a basic understanding of how to use Photoshop should be able to follow along. If you’d like any clarifications, just ask me on Twitter.

What are public domain images?

Public domain images are images where the copyright has expired, not been renewed, or deliberately released to the public domain. More on that here: https://fairuse.stanford.edu/overview/public-domain/welcome/

But the not-comprehensive short version is that any work whose first authorized publication date was before 1923 (1924 once the calendar tips over to 2020) is public domain in the US.

How can I use public domain images?

You can modify them, remix them, combine them, collect them and release them in an art pack, whatever (but so can everyone else). The public domain is awesome.

While you don’t need to credit anyone when using public domain images, it’s considerate to do so whenever possible. I like to support the work of the archives I use by crediting them, as well.

Where can I find public domain images?

The three main online archives that I used for Masque of the Red Death are:

Old Book Illustrations — Everything on OBI is public domain (to the best of their knowledge, of course). It’s a great resource, but I would caution against using anything but their raw scans. Some of the settings they use to create their lower res images are a little overzealous, particularly when it comes to line art. (One size fits all settings are rarely better than “close enough.”)

The Library of Congress Digital Collections — This collection unfortunately doesn’ t let you sift out historical photos when you search for drawings, but there’s a lot of great stuff.

I’m sure you don’t need me to explain how to search a website, so let’s say you’ve found an illustration you like, or a magazine you want to poke through. Now what? What you don’t want to do is just download the image on the page.

For instance, you can right-click images in the PDF viewer on the Internet Archive to download a single page as a JPG—but this is almost never the highest quality version of that image available. And on the Old Book Illustration website, while they have lower res versions in multiple sizes that have been cleaned up to some extent, if you know what you’re doing, you can always get better results. Which brings us to the point of this tutorial…

For most of this tutorial, I’m going to use this illustration from Old Book Illustrations. 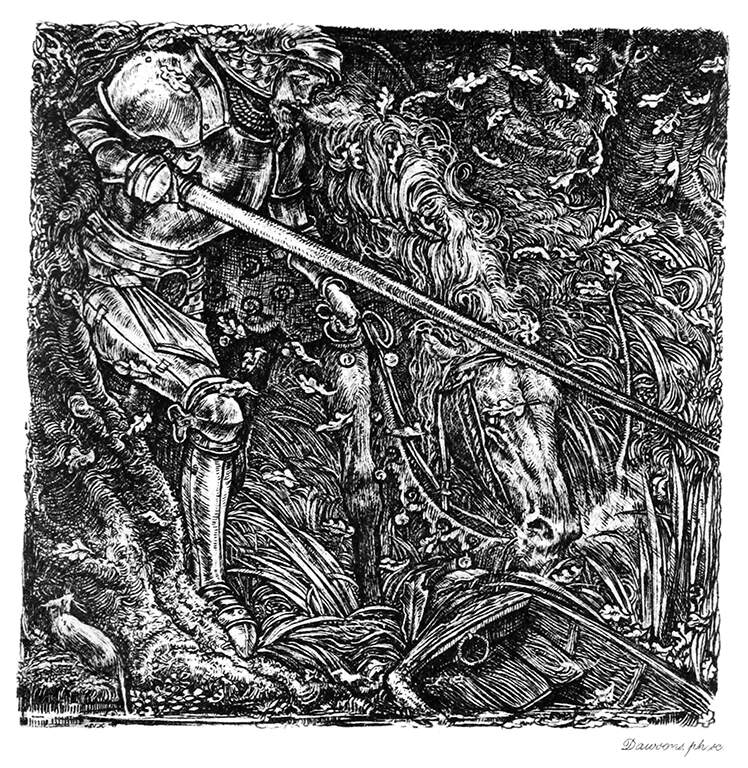 Now, this image (the 1600 px version) is pretty good. But we also have the raw scan available. So I’m going to download that instead.

On the Internet Archive, people name the files all kinds of weird shit, but look for the largest file size. For The Strand, vol. 48, for instance, that’s the “single processed JP2” one. Sometimes they’ll include “raw” or “original” in the file name instead (i.e. “single page original JP2”). You want the biggest, least processed version you can find.

The first step is straightforward: crop your image with the Crop tool. I want to eliminate most of the white border and the writing at the bottom right, and deleting a border is faster than cleaning it up. For some illustrations, you may also want to use the Polygonal Lasso tool (and the Delete key) to get rid of any text or image captions you don’t want.

Remove the paper background for black and white illustrations

This is our raw scan: 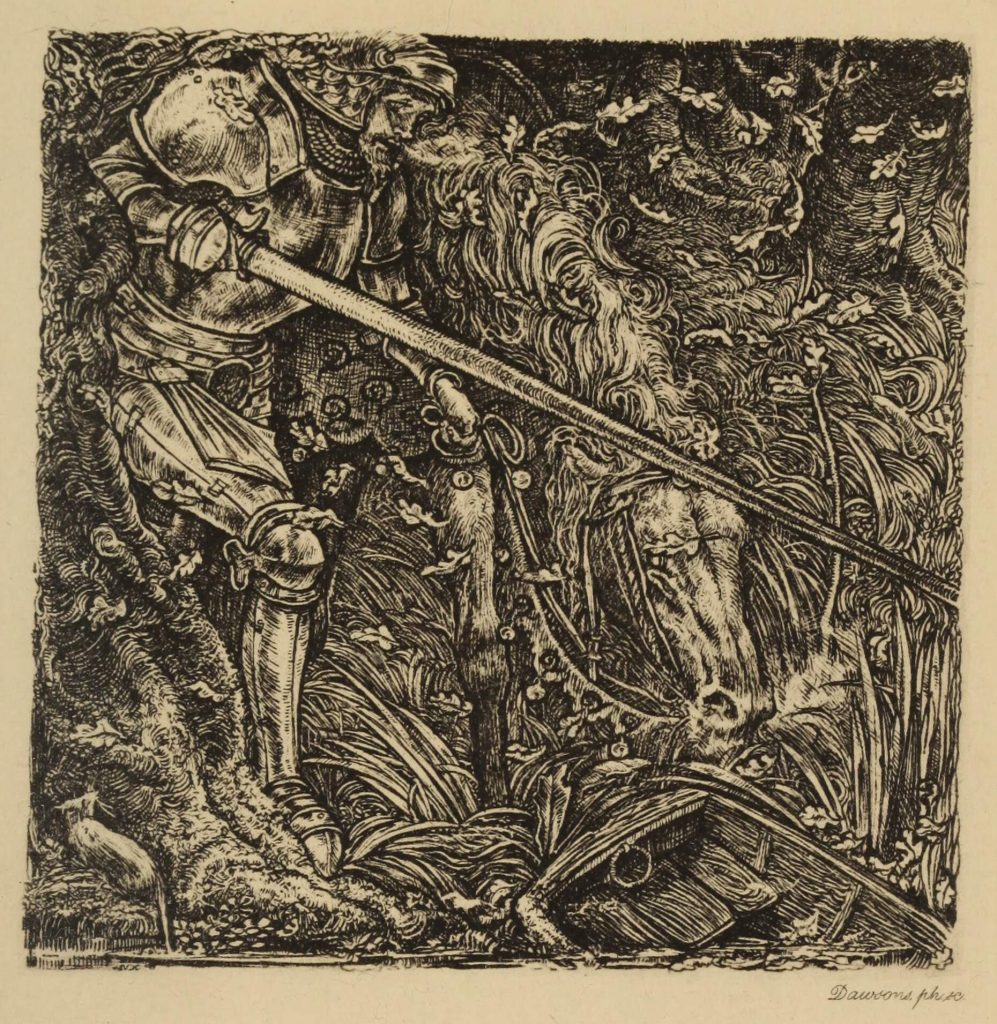 To remove the paper background do the following:

If your background is not pure white, you will need to correct for that next. Either the Levels or Curves commands are good for this, but I think Levels is easier. 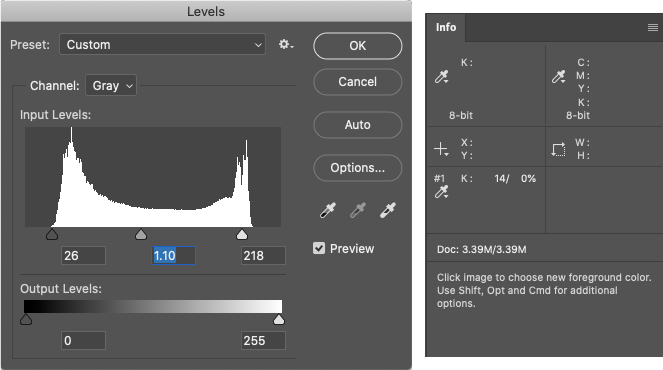 Note that the input levels you need will likely vary with every image.

So this is where our image is now:

Much better! You can see a hair above the knight’s head has disappeared, but there’s still a speck of… something… at the top left. Sure, you can leave these things, but that’s lazy, so there’s more work to do.

NOTE: Removing backgrounds from full-color images is possible, but also harder. If people are interested, I can try to do another tutorial about that, but it would be more advanced.

Change your resolution to 300 dpi

This is not strictly necessary, but as an old-school print production artist, I prefer to make all my images 300 dpi (Image / Image Size). Make sure to have Resample unchecked so this does not actually alter the image.

This lets you know exactly how big the image is while you’re working, so you don’t spend a lot of time fixing tiny things that will disappear. (This image is about 5.9″ square at 300 dpi, which is pretty big! If I’m using the entire illustration in a PDF-only ebook, it will probably be reduced significantly. At 150 dpi, that’s 11.8″, and my live area for an 8.5″ × 11″ page is well under that.)

Straighten the image (if necessary)

Not all images need this step, but if you’re placing a square or rectangular illustration into your layout and the illustration or its border are distorted, it’s going to look weird.

At a glance, this illustration looks square, and you might be fine with it as it is, but it’s actually pretty crooked. These kinds of distortions usually can come from the page not being totally flat when it’s scanned, a dodgy scanner, or a sliiightly crooked camera if they used a copy stand instead of a scanner. It’s also possible the original illustration is actually just that crooked. Who knows? But it doesn’t matter; you’re making a book, not digitally preserving a historical artifact. You can take liberties with this stuff for aesthetics if you want. 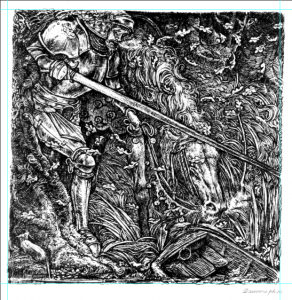 What if my image is too small?

Hypothetically, if your image is too small there are some more advanced tricks to coax a few extra DPI from an image, but they’re a little out of scope for this basic-level tutorial. (Perhaps another time.)

However… Pixelmator Pro has a new feature called ML Super Resolution, which uses machine learning to intelligently blow up images. In my tests, it’s better with full color/photographic images than with line art, but you can easily double the resolution of an image with little to no loss of image quality. I’m saying this as an experienced photo retoucher who strongly discouraged clients from “up-rezzing” small images for decades: it’s damned impressive.

I ran the image through ML Super Resolution (a one-click process) and it came up with this. Supposedly, the image at the right is 900 dpi (at the same physical dimensions), but it does look a little blobby if you zoom in closely, so I would only use it about half that size. Still, it’s noticeably sharper, and their machine learning is only going to improve. It’s a really interesting tool to keep in your back pocket, for when you really need an image to be a liiiittle bigger. (Unfortunately, Pixelmator Pro is also $40, but for those of you looking for an alternative to Photoshop’s subscription model, it’s a great option.) 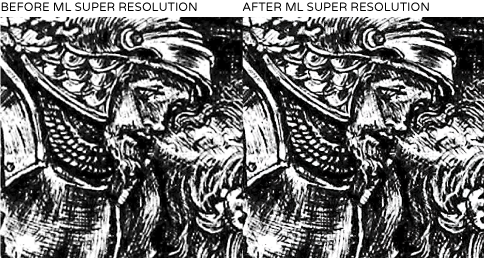 And again, because the image looks a little blobby, and our photo is already nice and big, I’m not going to use the ML Super Resolution version.

There are a lot of ways to sharpen images, and most of them get pretty heavy-handed. I prefer to use a lighter touch for this kind of thing, and sometimes simply running the Sharpen filter will do it. Especially with line art, if you try to sharpen up a fuzzy image too much, the artifacts that introduces can get pretty harsh.

For more advanced users, the Photoshop User Guide covers the other sharpening features very well. Unsharp Mask and Smart Sharpen can both yield excellent results, with finer control over the parameters. But understanding those parameters and how to set them gets tricky, so again, this area starts to get out of scope for a basic-level tutorial.

We’ll stick with our version here, which just used the Sharpen filter (once): it’s a one-click process (Filter / Sharpen / Sharpen). 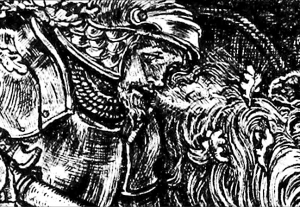 So here is the final image…

I did a little extra clean-up for this image, but it was pretty clean to begin with, so I wanted to use a different image to talk about manual clean-up below. Let’s jump forward a bit, to the final image:

For comparison, here is the 1600px version that OBI provided next to our manually cleaned up version. In addition to being straightened (though that’s hard to tell here), the image is obviously noticeably sharper and has better detail in the shadows.

And here’s a close-up:

Compare it to the manually cleaned up version here: https://www.dropbox.com/s/1o0x7r89j27h3xt/knight-wood-cleaned%20up.psd.zip

(Oh, and by the way: if anyone wants to use this cleaned-up version of the image in a book, be my guest. Please credit Old Book Illustrations and the illustrator, Charles S. Ricketts.)

I didn’t need to clean up the above image much, but no matter how good your Levels settings were, you’re going to have a little bit of noise or dirt, a blob of ink (or maybe a space where ink probably should be but isn’t)—maybe even a hair or two. Some lines might have fallen out, some thin spaces might have filled in. Remember, ink is a liquid, and printing is an organic process.

So the image in these files—scans of one hundred year old pieces of paper—isn’t necessarily a 100% accurate representation of the actual artwork, if that makes sense. Sometimes it can be hard to tell what’s noise, or dust, or actually part of the art, but it’s okay to take a few guesses as to the artist’s intent (and, again, to take a few liberties with it, if you need to).

Your main tools for this are pretty basic:

After spending a few minutes panning around this image (from The Strand vol. 27), here is the before/after:

(This image as downloaded from the Internet Archive already had the paper backgrounds removed.)

There’s certainly more I could do to the image, of course! But the smallest or lightest bits of noise are often fine to leave in if you’re planning to set the image to Multiply on top of a parchment background like in a lot of DMs Guild titles; it will just disappear in the parchment texture. And if you’re printing an image at smaller than actual size, some noise will get so small that it disappears.

Hopefully this helps! Again, if you’d like any clarifications, just ask me on Twitter. I’m happy to clarify, correct, or expand on this post where needed. (I already have, numerous times!)